Alas, I am not different than those thousands.  I wasn’t thrilled about the new design in the previewed cards we’d seen thus far…but I have to admit the cards look nicer than I thought they would and some of the photography is still very nice.  I also liked the sprinkling of throwback uniforms here and there on regular (I assume not SP) cards.

I bought four of my standard go to “Box” packs.  Not the blasters but the equivalent of retail Jumbo box packs that I had so much success with last year….would the good times continue to roll for our hero?

Yes and no.  No big hits but a nice selection of Dodgers and that’s all I really want anyway.

Here are some pictures and thoughts: 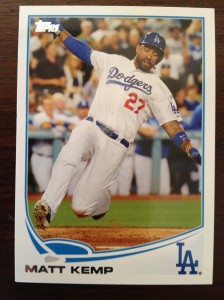 Nice to see Adrian in Dodger Blue! Looking forward to a great year!

No Kershaw base, but parallel and mini mojo!

Kershaw cameo! These guys are like Batman and Robin!